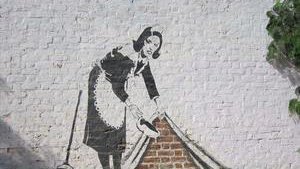 When cases involving the violent abuse of migrant domestic workers make the news, they are often described by journalists and politicians as 'trafficking' and 'modern slavery'. Usually dismissed and ignored as neither family members nor employees, migrant domestic workers are often caught between an excess of immigration regulation on the one hand and employment deregulation on the other. Migrant domestic work vividly illustrates the interplay of race, gender, poverty, and immigration in the political production of what is – and is not – seen as ‘employment’, ‘trafficking’ and 'modern slavery'.

Bridget Anderson
Professor of Migration and Citizenship and Deputy Director at the Centre on Migration, Policy and Society, University of Oxford

This event was held in connection with the British Academy Conference on Slaveries Old and New: The Meaning of Freedom.

Picture Credit: CEPT Wall Painting of a Woman Sweeper--inspired by Banksy's "Sweep It Under The Carpet"