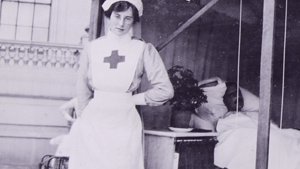 The current home of the British Academy was once the London residence of Lady Rosamond Ridley. This exhibition explores how Lady Ridley converted her grand family home into a hospital for wounded officers during the First World War.

Photographs show how the house was transformed into a hospital whilst diaries and poems reveal the intimate daily lives of the soldiers who were admitted to the hospital and the nurses who looked after them. Personal stories of sacrifice and recuperation alongside tales of mischief and laughter broaden our understanding of how the war was experienced on the home front. Not just by the soldiers who returned from the battlefield to recover from their injuries, but also by the women who volunteered to nurse them back to health.

With thanks to the Ridley family and Hugo Gell.