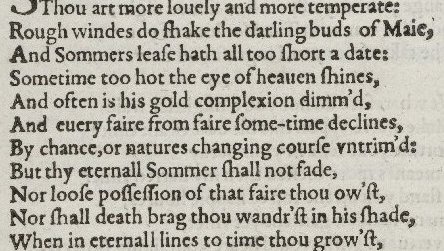 I used to teach an introductory course on poetry to first-year literature students, and in the first class I would present them with the following sentence: “I bought a dollar and a half’s worth of small red potatoes, took them home, boiled them in their jackets and ate them for dinner with a little butter and salt.” I asked them what kind of writing this was. Mostly the students guessed it was a diary entry by someone leading a particularly dull life (and one lacking in protein and green vegetables); some went as far as to speculate that it was a fictional diary entry, intended to convey the dullness. Just one student, in the 10 years or so I taught this course, said that it came from a poem – but only, she explained, because it was a course on poetry and therefore likely to be a trick question.

The sentence is in fact the opening of a poem by Philip Levine, "The Simple Truth”, first published in 1994; you can find it online though it would be good to buy or borrow the book it comes from, also called The Simple Truth. I love this poem, which starts with so “unpoetical” a statement, but does so in order to say something that can’t be said in the form we traditionally think of as poetry. But I love the traditional forms too; there isn’t a choice to be made between “I bought a dollar and a half’s worth of small red potatoes” and “Shall I compare thee to a summer’s day?” or “Hail to thee, blithe spirit”; such choices are stifling. I would only suggest that the force of Levine’s poem depends, in part, on his knowing the traditional forms – knowing enough to play against them. It’s serious play – my own definition of poetry, if I had to give one.

Poetry began as song, and poems continued to be called “songs” long after the connection between words and music was broken, and the work of singers such as Bob Dylan shows that the process can go into reverse – that poetry can resume its old vocation. But music is woven into language at a deeper level. Language is pulse and breath; we exist, we express ourselves, as rhythmical beings. Poetry is one of the arts – not the only one – that takes account of that fact. The “form” of poetry, therefore, is something other than the many forms it may take – from Petrarchan sonnet to rap, from epic to epigram. Rhythm is the matrix from which you can derive as many forms (ugly or beautiful, according to taste) as there are minds to conceive and voices to utter. Philip Levine’s sentence is beautiful, even more so when you see its shape as lines of verse on the page, prompting your inner voice.

The question “what is poetry?” ought, strictly speaking, to be kept separate from the question “what is poetry for?” but in practice it’s a blurred line. If it seems wrong to require poetry to bend to a purpose, it’s also foolish to forbid it from doing so; poetry has served every human master. The notion that “poetry” should not deal with certain subjects has been current in every period, but there is no agreement on what subjects to ban. Judgments about bathos and blasphemy in the 18th century, for example, have lost their force, replaced by our own definitions. It may be argued that poetry has become more inclusive, more diverse – it can claim, like Walt Whitman, to “contain multitudes”. But “contain” has a double meaning. It is all very well to hold multitudes, to form an ideal community in which different points of view live side by side. Everyone is welcome in poetry’s big tent! But to contain is also to set limits, to control, even to keep at bay. There are kinds of poetry – satire, for example – which are designed not to open borders but to police them. Think of the hacks and poetasters flayed by Alexander Pope in The Dunciad, that greatest and most unfair of poems.

Poetry asks us to pay attention to language, which is like paying attention to ourselves – the forms we inhabit. It’s both exercise and reflection, without which we slacken, but there’s no ideal shape or outcome. Our bodies are animated by memory, will, desire, appetite. Poetry, too. An affair of the heart, yes, but also of the pulse; of the lungs and limbs; a language of the body as much as the mind; “a living soul”, in the Bible’s phrase. That’s it, really.

Professor Daniel Karlin FBA is Emeritus Professor of English Literature at the University of Bristol. He was elected Fellow of the British Academy in 2020.