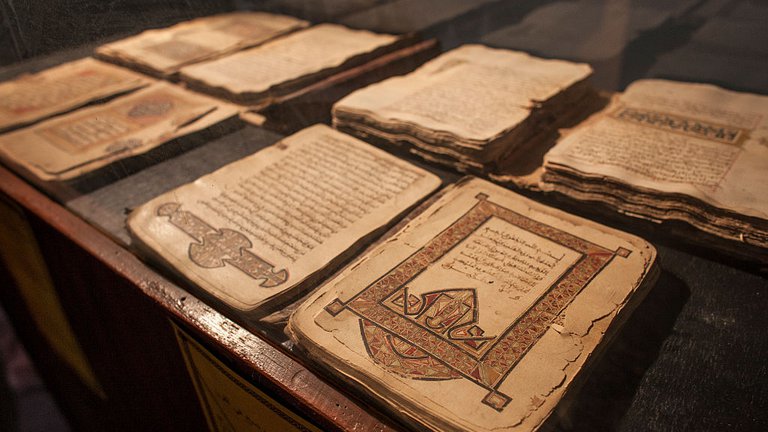 Palaeography (‘old writing’) is the study of pre-modern manuscripts: hand-written books, rolls, scrolls and single-sheet documents. The contents of these manuscripts are a focus of study for several disciplines of the humanities, but palaeography is the discipline that examines texts in the particular material form in which they circulated. It strips away the filters that exist between the modern printed or online copy and how that text was actually encountered by pre-modern societies, recognising that the visual presentation of a written text contributes to its meaning.

Palaeography encompasses the ‘what’, ‘how’ and ‘why’ of the use and development of handwriting to communicate information and ideas in periods before the widespread adoption of printing in movable type.

Manuscripts were produced in many pre-modern societies in far greater quantity than is generally assumed, despite the fact that literate skills were usually restricted to certain privileged groups. A very great deal has been lost, and the randomness of survival has made that loss uneven. Nevertheless, it is possible to gain an impression of the scale of what once existed from the hundreds of thousands of manuscript books and millions of charters and other documents that survive from medieval Europe and the hundreds of thousands of late-medieval manuscripts from the private libraries of Timbuktu. Just how diverse written materials could be in any one place is clear from the extraordinary range of written artefacts among the 250,000-odd fragments deposited according to rabbinic law in the Cairo Genizah from at least the 11th century onwards, and the remarkable number of languages and script-systems represented in the many thousands of manuscripts sealed around AD 1000 within the Buddhist cave library near Dunhuang, on the edge of the Gobi desert.

Palaeographers usually specialise in the system (or systems) of script used by a particular society. Latin palaeography (my own specialism), for example, is the study of manuscript books and documents in the Roman alphabet. In their teaching, Latin palaeographers usually span the entire Middle Ages, providing students across the field of medieval studies with the technical skills they need to decipher literary and documentary texts in their original manuscript contexts and to introduce them to the methods required to date, localise and interpret the significance of these manuscripts. The same breadth characterises the work of palaeographers holding posts as curators in libraries and archives. In their own research, however, palaeographers develop special areas of expertise: prolonged experience with manuscripts from a more restricted geographical and chronological range may enable them to distinguish the handwriting of individual scribes, make more informed judgements about dating and localisation, account for changes in scribal practice and recognise forgeries.

Even before the term ‘palaeography’ was coined by Bernard de Montfaucon for the title of his Palaeographia Graeca (1708), the use of new technologies was going hand-in-hand with the study of manuscripts. Jean Mabillon, in his De re diplomatica (1681), illustrated his outline of the history of Latin script with numerous engravings of medieval script, including full-page pull-out reproductions of early medieval charters. In the late 19th century new methods of photographic reproduction were exploited to produce entire volumes of facsimiles of medieval manuscripts and documents, which became the bed-rock of the teaching of palaeography in the 20th century. Now, once again, technological advances offer fresh opportunities to facilitate the study of the ‘old’ technology. Digitisation projects are making images of medieval manuscripts and documents accessible on a hitherto unparalleled scale. The challenge for palaeographers is how best to make these new resources intelligible and meaningful to students, scholars and the wider public.

Teresa Webber is a Fellow of Trinity College, Cambridge and Professor of Palaeography at the University of Cambridge. She was elected a Fellow of the British Academy in 2017.