What can our ancestors teach us about working from home? 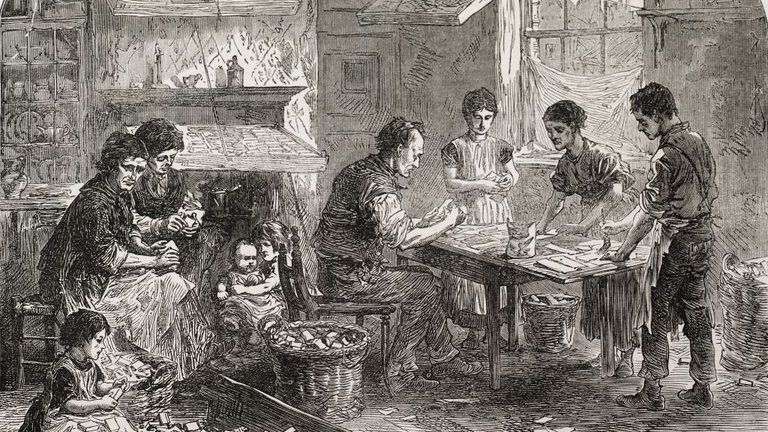 The COVID-19 pandemic has brought about a dramatic shift in working patterns for a large section of the population. According to the Office for National Statistics, almost half of British workers (49%) reported working from home at some point in the seven days before 14 June, whilst commentators maintain that we are witnessing what could be a permanent shift in the way many of us work. Although this change has been presented as revolutionary, in many ways we have been here before. Rather than representing a significant break from the past, this is arguably a ‘revolution’ in the 18th-century sense of a return to a previous system: less of a turning point perhaps, more of a return to older ways of doing things.

This is true not just in terms of work taking place predominantly within the home, but also in terms of some of the issues that this raises for workers. Lockdown stories about the pressures for families and households facing competing demands for workspaces and equipment are now commonplace. These are arguably felt most sharply in households containing parents and children, where the burden of homeschooling – especially in poorer households – can see inhabitants battling for both tabletops and PCs, with mothers shouldering most of the responsibility for supervising educational activities and providing childcare. Less frequently discussed, but nevertheless widespread, are households of (usually) younger and unrelated adults where similar tensions play out in terms of vying for space and peace to work in shared houses and flats.

Trading households in the 18th and 19th centuries

Though extended periods of home working represent a novel experience for most of us in the 21st century, as a historian of the 18th and 19th centuries, the problems caused are nothing new, particularly concerning access to space. Living and working in the same house was commonplace in the earlier period. This was especially true for those ‘in trade’ – those small-scale manufacturers, retailers and service-providers who constituted anything from 20-60% of the urban population in the northern English towns that are the subject of my research. Trading households typically included individuals who were not related by blood and were of mixed ages, so that one might live with one’s employers, employees, servants, apprentices and business partners.

Though the period of the Industrial Revolution in England is often thought of in terms of the separation of home from work, for the majority of those involved in trade, the domestic and the commercial continued to co-exist under one roof into the 20th century. As one might expect, this made for particularly complex living and working arrangements. It is one of the subjects described in my recent book with David Hughes for the British Academy’s Studies in Social and Economic History (SESH) series, which reproduces some of the sources I used for my earlier monograph, Family and Business During the Industrial Revolution.

Can we learn anything from these earlier experiences of home working? Though my examinations have shown that trading households could be places of companionship, affection and the well-practiced art of ‘rubbing along’ together, they were also sites of tension and struggle. This was often due to a failure to adhere to unwritten rules of conduct that were vital in most households. One of the subjects of our SESH book, the Manchester journeyman grocer, George Heywood, conducted a love affair with his employer, Ann Owens, in a house in which he lodged along with her several children, including adult sons. But he enjoyed less cordial relations with his next employers, John and Elizabeth Jones, as part of a household where space was at even more of a premium. The Jones’s house was likely to have consisted of six rooms, at least one of which would have been given over to the business if the cellars were suitable for storage, and more than one if not. The ground floor probably contained a shop at the front, a parlour or storeroom behind and a kitchen in a rear outrigger. Upstairs, the three or four other rooms devoted to domestic use would have had to accommodate Mr and Mrs Jones, a female servant, three adult male employees and at least four children between the ages of ten and one (the three daughters and one son of John and Elizabeth Jones), plus Mrs Jones’s two daughters from her first marriage, who were in their mid to late teens. This almost certainly meant that children and employees had to share rooms for sleeping (and probably beds), divided according to sex.

Friction in the household

Limitations of space heightened the need to control certain types of behaviour. Activities which demanded the segregation of the sexes – such as sleeping, washing and mending intimate forms of clothing – required individuals to be sensitive to the use of particular spaces at certain times of day. Heywood appears not to have understood rules within the Jones’s packed household that were designed to uphold propriety and reduce interpersonal friction. An argument between John Jones and Heywood in November 1814 makes this clear. Heywood recorded in his diary that Mr Jones ‘attacked me… before we opened shop in a very unexpected manner’. He was accused of ‘rummaging up and down the house’ which proved ‘very inconvenient at meal times’, failing to attend chapel with the rest of the household, going out in the evenings, which another male employee and Mr Jones’s son had begun to copy, sitting up late in the parlour and disturbing the women of the house who had ‘work which they don’t wish every one to see such as mending their clothes’, talking to Betty, a domestic servant, in a bedroom without anyone else present during daytime, and washing in the back yard or kitchen at ‘unlikely times’ when the young women of the house might see him.

Heywood’s behaviour clearly posed a threat to the smooth running of the Jones’s establishment. His failure to act appropriately and to show proper concern and respect for others in his use of household space meant that the dwelling switched from being a relatively cordial establishment, to a place of tension and unease. Though the concerns of modern-day households are likely to be rather different to those mentioned by John and Elizabeth Jones, having a shared set of rules concerning the uses of different spaces for particular purposes and times – and sticking to them – is still probably the best way for home working and domestic life to co-exist peacefully.

Hannah Barker is Professor of British History and Director of the John Rylands Research Institute at the University of Manchester. Her research on families and business was funded by the Economic and Social Research Council. She is currently leading two Arts and Humanities Research Council projects: ‘Unlocking the Mary Hamilton papers’ and ‘Faith in the town: lay religion, urbanization and industrialization in northern England, 1740-1830’. Her co-edited volume in the British Academy’s 'Records of Social and Economic History' series ‘Business and Family in the North of England During the Early Industrial Revolution' is available through Oxford University Press.