The unpredictable life of an Egyptian film set 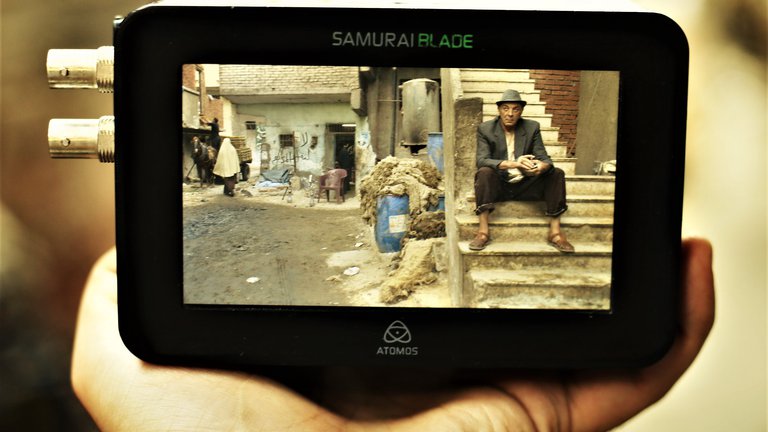 I was sitting next to the editor Mostafa Nour after we had left the set of Poisonous Roses (2018). He was transferring some footage onto the company computer when two sound workers walked into the office covered in white dust and gravel. The sight was astonishing; we had just returned from the location and could scarcely imagine what would have caused the workers to look in such bad shape. As it turns out, some structures in the courtyard where we were shooting had collapsed while most of the crew was coming out onto the main road. The crew and the local inhabitants narrowly escaped the falling buildings and, thankfully, no one was injured.

This accident happened while I was following the day-to-day work of Egyptian film production in Cairo as I was researching my book, Making Film in Egypt. Judging by this story, it would seem like extreme events can happen at any moment on set – and sometimes, they do.

Yet unpredictable happenings are not usually as dramatic as a collapsing edifice. More often, it will be a failing piece of equipment or a wrong costume change or a forgotten key prop. Every day on set, something goes wrong and someone must fix it. A more sober look at commercial filmmaking shows us that workers do not live in permanent fear of uncertainty but rather in a watchful state, between conventional expectations about the unfolding filmmaking process and constant anticipation of what could go wrong next.

So how do filmmakers cope with unpredictability? The answer is, partly, that they adhere to a strict hierarchy of command. Some workers get to decide what every detail in the film will look like; the director above all, but also the cinematographer, the art director, the screenwriter and accessorily the stylist and the sound engineer. Most other workers, in contrast, have to execute what gets decided without having a say in creative decisions. Production workers, gaffers, grips, camera technicians, set builders, prop assistants and post-production staff all work around the clock to make sure that nothing stands in the way of the creative crew’s vision.

What interested me was not just to notice this hierarchy but also to explain its consequences on the production process. For one thing, while those who call the shots gain the most credit in the end, those who actually make the movie – those who fix things when they go wrong – gain little recognition outside a passing mention in the credits. Making a movie is, in this sense, as much about authority as it is about vision.

The constant availability of manpower to fix unpredictable problems as they happen – sometimes even before they happen – is what ensures that the creatives can reach for the stars. Unless, of course, the sky actually falls on their head.

The anthropology of cinema

Egypt has long been the centre of the most prolific film industry in the Arab world but little was known about its production processes. Like many Egyptians, I grew up on a steady diet of classical Egyptian comedies and melodramas and I was always curious to know how those movies were made. Over time, I became interested in how workers go about the daily business of making films in a city like Cairo, which is comparable to major filmmaking centres like Los Angeles, Mumbai or Lagos. What I discovered was that Egyptian film workers face the same unpredictability as elsewhere but their way of approaching it relies on a number of contextual factors – for instance, a specific attitude to the expected yet unpredictable future or a strict hierarchy between creative and executive workers.

On their own, these findings tell us much about the world of filmmaking in Cairo, but I believe that this research has the potential to impact how scholars study film more broadly. The overwhelming tendency in film studies has been to centre “the film” as a coherent text to be analysed by scholars. I have tried instead to centre the social relations behind filmmaking, in line with a recent wave of scholarship in the anthropology of cinema, where fieldwork with film practitioners is privileged over armchair interpretations. Seeing filmmaking as a set of human relationships rather than audio-visual material can perhaps better explain how movies are made and why this industry still matters so much.

Dr Chihab El Khachab is a British Academy Postdoctoral Fellow at the Faculty of Asian and Middle Eastern Studies, University of Cambridge. His book, Making Film in Egypt, was published by the American University in Cairo Press in March 2021.