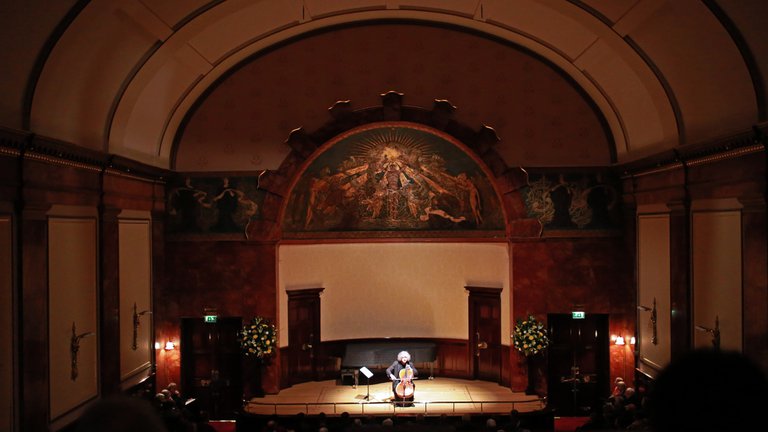 If you’ve ever attended a concert of Western classical music, you may be familiar with the strategies for concealing people’s bodies at work in that setting. Performers are decorously clad in black and discreet in their physical gestures; audience members, seated in neat rows, avoid making any unnecessary movements or sounds. Only when the music has faded away does the relief set in of being allowed to clear your throat and clap your hands.

Where did these strategies of bodily concealment originate? The late 18th century was a turning point in patterns of musical consumption across Western Europe. It was then that the German philosopher Immanuel Kant formulated his influential aesthetic theory, which helped turn musical works into transcendent, disembodied objects of contemplation. It was also in the decades around 1800 that modern concert life took off, providing the spaces and rituals to enable this aesthetic contemplation. Art music became primarily an object for cognitive appreciation, set apart from ostensibly more physical forms of music-making such as popular song and dance; perceptions that were further cemented in 20th-century musicological scholarship.

But all music-making involves bodies: performers’ bodies produce the sounds and listeners’ bodies receive and respond to those sounds. Music is well-known for its capacity to give you chills, make your heart race or make you cry. Early modern commentators were supremely attuned to these bodily forces. In the period ca. 1550-1750, the idea that music should ‘move the affections’ or emotions of listeners was a constantly repeated refrain. And that ‘moving’ effect was very much corporeally grounded. As the French writer M. de Vigneul-Marville proclaimed in 1699: “music and the sound of instruments contribute to the health of the body and the spirit, they aid the circulation of the humours, purify the blood, dissipate the vapours and dilate the vessels and pores”.

Music could alleviate headaches, expel melancholy fumes and cure the bite of a poisonous tarantula by making the afflicted dance and sweat until the venom was driven out.

In order to grasp the experiential reality of these effects, we need to look at how human bodies were understood at the time. In the West today, we tend to think of our bodies as autonomous, closed-off containers of a non-physical inner self. But early modern bodies and selves were more fluid and porous. “All bodies are Transpirable and Trans-fluxible, that is, so open to the ayre as that it may easily passe and repasse through them”, observed the English medic Helkiah Crooke in 1615.

Music could easily penetrate these porous bodies and cause profound change within them. In particular, it could affect the flow of the vital spirits – a subtle, undetectable substance that formed the bond between body and soul. As the German encyclopaedist Johann Heinrich Zedler explained: “The spirits are the fine, volatile and extremely mobile particles of the living body, which are… distributed via the nerves to all parts of the body… They are the cause and origin of the movement of the senses, the emotions, and all functions that occur in a living body”. It was those spirits that made emotions happen: in joy, they expanded and flowed freely, producing a pleasant warmth and feelings of exaltation; in negative emotions such as fear or disgust, they stagnated around the heart, causing coldness, pallor, trembling and unease.

How music moved its listeners

As they penetrated a porous human body, musical sound waves could alter its flows of spirit or blood directly. The Lutheran theologian Christoph Raupach attested in 1717: “The sound of music… spreads together with the air it moves and is transported to the ear. It penetrates even solid bodies, but all the more so our human bodies, which are very porous and full of holes. It does not simply go in the ear, but also to the heart itself, which is the workshop of the vital spirits, which are dispersed throughout the body… These vital spirits… are very easily moved by air that is moved harmonically or musically; and this motion, because it is felt by the soul, produces different affective motions”. Specific musical features could allegedly induce particular effects: whereas consonant sounds made the spirits flow smoothly, dissonances could make them contract, causing sensations of pain or trepidation. According to the Jesuit philosopher Athanasius Kircher, “Certain sounds are so incongruous and difficult that one’s teeth grind and ache from them; whereas others are so pleasant and lovely that they want to draw the soul out of itself.”

The physiology of a Bach cantata

So when Johann Sebastian Bach’s Cantata 199, written in the 1710s for a Lutheran church service, opens with the line “My heart is swimming in blood”, this may now strike us as a strange or even repulsive metaphor. But the formulation alluded to a certified medical condition, called plethora, in which excessive amounts of bodily fluid collected around the heart in moments of distress. And when Bach accompanied those words with a series of intensely dissonant chords, these could have induced a comparable state of physical and emotional distress in his listeners.

Overall, the cantata’s text articulates powerful feelings of remorse over the sinfulness of mankind; and through Bach’s musical setting, those feelings became viscerally palpable for his congregants. Only in the cantata’s final movement, “How joyful is my heart”, are listeners released from this state of psychosomatic anguish. The consonant harmonies, mellifluous tune and light-footed rhythms could restore the spirits to a free-flowing condition, flooding the whole body with the physical manifestations of joy.

Music had the potential to act upon early modern body-souls in striking ways that may well appear improbable today, especially in relation to those repertories that we now usually encounter in the restrained setting of the concert hall. However, these historical insights could invite us to try and retune our own ears and bodies more closely to these remarkable musical experiences.

Dr Bettina Varwig is Lecturer in Early Modern Music and Director of Studies, Emmanuel College at the University of Cambridge. She received a British Academy Mid-Career Fellowship in 2019. Her research into how music could make us feel things featured in the British Academy Virtual Summer Showcase.