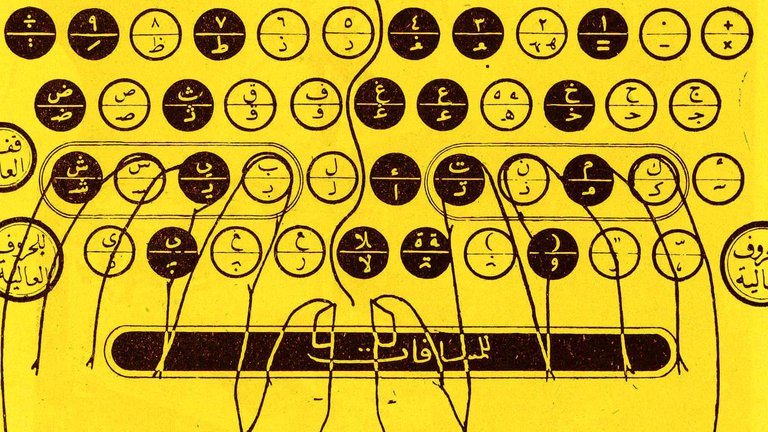 Perhaps the most ubiquitous, resilient and yet nearly invisible thread linking the 19th century, the second industrial revolution, the machine age and the digital era is the humble keyboard – a material and conceptual legacy that we encounter every single day. Yes, the very thing that was used for typing this text – and the same ‘thing’ that you might use on your computer or phone the moment you’ve finished reading! While the two ‘things’ are not quite the same – I used an instrument with physical and material properties, you might use a floating configuration that simulates ‘keys’ on a screen – there is a direct bodily and functional link in the experience of typing. In both cases, the principle is that the alphabet is laid out in front of us in a very specific arrangement, while our fingers hover over that array, pressing or tapping individual keys to compose text.

Does this setup sound peculiar at all? Most likely not, given how familiar and invested we are in this practice, but just imagine how it would have struck the general public in the late 1800s. What a strange idea, to peck at letters arranged in a jumble, not in alphabetical order, where even the literate could struggle to put together a word in speedy fashion. But if you were to be transported back to the last decades of the 19th century, by when the first commercially viable typewriters had become commonplace, you could present the keyboard on your 21st century device and typists – who were then referred to as ‘typewriters’ – would have no problem using it, or at least recognising the keyboard as entirely familiar. Indeed, they might be amused looking at the 21st-century digital device simulating the mechanical functions of a keyboard and being tapped in the same way that their own mechanical contraptions necessitated. In a way, that’s the equivalent of moistening a finger to turn the pages of an e-book – the material rationale for certain actions (like pressing a key to imprint a letter on paper) may be long gone, but particular forms of interaction have become embedded in practice, even in unrelated or redefined contexts.

How we arrived at QWERTY keyboards

Our electronic, digital, screen-based and physical keyboards have had the same configuration – QWERTY or a slight variation of it – since the first commercially successful typewriters in the 1870s. It is an arrangement that has more or less solidified on the face of the keyboard across mechanical, electric, electronic and digital text-input mechanisms. The remnants of the keyboard’s technological past are also very much present on our devices today. Take the ‘shift’ key, which originally referred to the platen-shift mechanism in typewriters: a physical ‘shift’ that made the type-elements or type-bars hit different positions on the platen. This was introduced to double the capacity of the keyboard and accommodate both upper and lowercase letters; the earliest typewriters usually only had capitals. Another example is the ‘return’ key, or carriage-return as it was known, which refers to the carriage on a typewriter returning to the start of a new line. The actual mechanism and practice it refers to has been left behind, but the conceptual and technological infrastructure that typewriters introduced in the 19th century continue to shape our material encounters with text today.

The musical analogy of composing text on a keyboard is as evocative as it is literal. Piano keys were precisely what was used as the physical mechanism in early typewriters. This was not a new association between the letters of the alphabet and keys on a keyboard; the connection already had an established precedent in the printing telegraph of 1860. On the printing telegraph, letters were arranged in alphabetical order, but the configuration of the keys divided them into ‘rows’, starting as ABCD, turning at N and continuing in a reversed manner with OPQR…WXYZ. Looking at our own keyboards today, we can see the remains of that original configuration. Various letters – particularly vowels and semivowels – have moved and migrated over time to other places in the slotted geography of the keyboard, but the bottom two rows still start with A, trace the remaining threads of alphabetical ordering with DFGH…, reversing the same way at KL…MN, and end with Z right under A, like in the printing telegraph’s keyboard.

Early keyboard arrangements on typewriters experimented with the order and layout of keys and presented various modifications that played a part in shaping the eventual configuration. The Sholes & Schwalbach patent model (c.1872) for ‘Improvement in Type-Writing Machines’ not only shows the addition of pegs to the key-bars, but also a reversed alphabetic arrangement on the pegs. The lower row starts ABCD… turning at K, and it ends with W on the top row, which is where it remains today. A comprehensive archaeology of the keyboard’s arrangement is perhaps an unending quest. Though we know that studies for letter-frequency, finger-movement and speed were part of the considerations for subsequent developments, the QWERTY keyboard still retains several mysteries and continues to exert a peculiar power. After 150 years, it is now also the embodied memory of typewriters in our own devices, continuing to shape our understanding and deployment of the alphabet on a daily basis.

One-size fits all: the keyboard straitjacket?

It is fascinating that keyboards and text-input should become so deeply, inextricably, linked in the alphabetical, mechanical and popular imagination. Sometimes it can be difficult to imagine that different ideas of text-input have coexisted with keyboards all along. In the same way, it can be difficult to comprehend that there are non-alphabetic, syllabic and ideogrammatic writing systems for which a keyboard does not suffice. The keyboard, at least in all of its early iterations, was a response to a specific visual and material understanding of writing and a very specific conceptual apparatus – that of the Latin alphabet.

Yet the attraction of the typewriter as a ‘universal’ instrument, across languages, scripts and cultures, tells us a lot about how tools and technologies shape global communicative infrastructures. Coinciding with the general decline of colonial empires and the rise of commercial enterprise in the 20th century, the keyboard was often used as the yardstick of modernity. A syllabic or idiographic writing system that did not fit the keyboard’s allowance of a certain number of keys – a provision defined by the Latin alphabet to begin with – could be termed unfit for the modern world. Calls for ‘simplification’, rationalisation, or abandonment of such scripts as Arabic, Chinese or Devanagari, to name a few, have been a prominent part of 20th-century history. They often started with material encounters between written communication and technology, instigated by the struggle of ‘fitting’ a script to the limitations of the keyboard.

The industrialising knowledge economy that machines like typewriters were meant to support acquired a global dimension, starting in the last decades of the 19th century and extended beyond the first half of the 20th. The optimisation of labour in knowledge production became a key concern in this period, reflecting a larger quest for colonial or localised forms of modernity across various parts of the world. Notions of itemising language, counting word-frequencies and statistically analysing the speed of reading and writing were deployed to ‘simplify and rationalise’ writing systems that were non-alphabetic, such as those across various parts of Asia, in order to fit them to the demands of the keyboard – not only on typewriters but also on a host of other typesetting devices. Inventors, entrepreneurs and political actors used this process of technological negotiation not only to seek efficiency in textual communication, with various goals of education, literacy, and propaganda, but also to advance local agendas and struggles around regional identity – all of which had language and script at the core.

The long history of encounters of Asian writing systems with technologies of text production demonstrates how scripts are not merely passive carriers of information, but complex existential artefacts, mediated through devices that can be at odds with social, cultural and technological contexts of various writing systems of the world. Asian scripts presented a different set of requirements for their material manifestation, demanding different infrastructures for engaging with text. Alternative forms of the typewriter were engineered in the Asian context that represent important points of departure – not only for their mechanical ingenuity, but also for our understanding of text-input in the 20th century as a more diversified practice.

Dr Vaibhav Singh is a Research Fellow in Typography and Graphic Communication at the University of Reading. He received a British Academy Postdoctoral Fellowship in 2017. His research exploring how we think about text and technology through the use of keyboards today featured in the British Academy Virtual Summer Showcase.

You can read more about his research projects at Contextual Alternate.

Lead image: Page from an Arabic typewriting manual from Cairo, 1953 with instructions for keyboarding practice. Image from Vaibhav Singh’s collection.

If you like discovering more about the humanities and social sciences, join us at our Summer Showcase 2022, a free festival of ideas #ForCuriousMinds, 17-18 June. Book now.

How did we invent technology?