The Music Road: Coherence and Diversity in Music from the Mediterranean to India 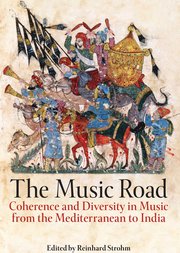 Proceedings of the British Academy, volume 223

The Music Road contains contributions on musical cultures from the Mediterranean to India which brings together historical research, philology and ethnographic fieldwork to revive the differentiated voices of this world region. It is here referred to as ‘the Music Road’, to emphasize the musical traditions in this western half of the ‘Silk Road’, and the transitional nature of its cultural migrations and coherences.

Mobility in space, transmission in time and ‘the East-West imagination’ are demonstrated in the following historical cultures: Ancient Gandhar? (N.W. India, first centuries CE) and the tradition of Alexander's conquest; sections on ‘Intercultural Islam’ from medieval Persia to modern Turkey; ‘Indian encounters’ with the West - and vice versa - in music and dance (18th-20th centuries); Greek music and theatre as a bridge between East and West; and Gypsy musical styles in European nationalist music.