The Practical Turn: Pragmatism in Britain in the Long Twentieth Century

by Cheryl Misak and Huw Price 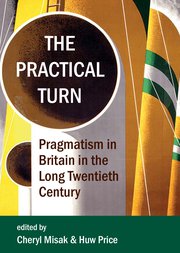 Proceedings of the British Academy, volume 210

American pragmatism, born in the 1870s in Cambridge, Massachusetts, has as its central insight the idea that our philosophical concepts of truth, knowledge, probability, and so on must start with, and remain linked to, human experience and inquiry.

This book traces and assesses the strong influence of American pragmatism on British philosophy, with particular emphasis on Cambridge during the inter-war period, on post-war Oxford, and on recent developments. Most philosophers would say that American pragmatism received only a hostile reception in England when the ideas first travelled across the Atlantic. But this volume argues that the movement of pragmatist ideas in Britain was a strong and important current, cutting new channels to fruitful ways of thinking about philosophy's most profound problems. Its ideas have found a home in the work of Wittgenstein, Ramsey, Anscombe and, more recently, Simon Blackburn and Huw Price.