Power and Place in Europe in the Early Middle Ages 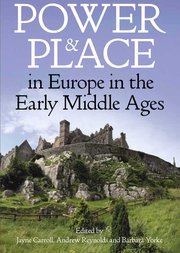 Proceedings of the British Academy, volume 224

This volume brings together a series of case studies of spatial configurations of power among the early medieval societies of Europe. The geographical range extends from Ireland to Kosovo and from Scandinavia to the Mediterranean world and brings together quite different scholarly traditions in a focussed enquiry into the character of places of power from the end of the Roman period into the central middle ages. The book's strength lies in the basis that it provides for a comparative analysis of the formation, function and range of power relations in early medieval societies. The editors' introductory chapter provides an extended scene setting review of the current state of knowledge in the field of early medieval social complexity and sets out an agenda for future work in this topical area. The regional and local case studies found in the volume, most of them interdisciplinary, showcase detailed studies of particular situations at a range of scales. While much previous work tends to focus on comparisons with the classical world, this volume emphasises the uniqueness of early medieval modes of social organisation and the need to assess these societies on their own terms.