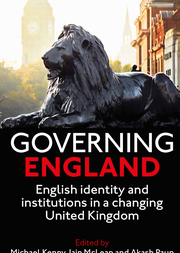 Proceedings of the British Academy, volume 217

England is ruled directly from Westminster by institutions and parties that are both English and British. The non-recognition of England reflects a longstanding assumption of 'unionist statecraft' that to draw a distinction between what is English and what is British risks destabilising the union state. The book examines evidence that this conflation of England and Britain is growing harder to sustain, in light of increasing political divergence between the nations of the UK and the awakening of English national identity. These trends were reflected in the 2016 vote to leave the European Union, driven predominantly by English voters (outside London). Brexit was motivated in part by a desire to restore the primacy of the Westminster Parliament, but there are countervailing pressures for England to gain its own representative institutions, and for devolution to England's cities and regions.

The volume was launched at a panel discussion meeting held at the British Academy on 4 December 2018.

The following is based on remarks made on that occasion by Professor Dawn Oliver FBA (Emeritus Professor of Constitutional Law, UCL).

Discussions around the current and future state of English and English identities now abound, but some crucial questions are not given the prominence they should:


Considering this question called to my mind the 1950s Michael Flanders and Donald Swann song ‘The English are Best: A song of patriotic prejudice’. The song parodies English nationalist attitudes of the period. These entailed negative stereotypes of the Scots, Welsh and Northern Irish, and dislike of Europeans, Russians, and foreigners generally. Foreigners, according to the parody of Flanders and Swann,

‘… have simply no notion of playing the game,
They argue with umpires, they cheer when they’ve won
And they practice beforehand which ruins the fun!’

The audience knew that Flanders and Swann were not endorsing these attitudes. They were offering by implication their alternative version of Englishness.

They did not misunderstand the English nationalists. They simply disagreed with them. Nor did they endorse negative stereotypes of their fellow Britons in Scotland, Wales and Northern Ireland. They were not prejudiced against Europeans and other foreigners. They were not self-satisfied or complacent about ‘the English’. Quite the reverse (though they were fond of them).

The point is that already in the late 1950s there were divisions between English nationalists and what we would now call the liberal elite. There have always been a range of Englishnesses. And how these Englishnesses change may well affect England as a functioning or dysfunctional political community.

So how has England changed in, say, the last sixty years?

1. Diversity
England, like all countries, is now very diverse. Immigration from the British Commonwealth, from Europe and across the world has changed much. Immigrants, especially those from the Commonwealth, may subscribe more readily to an overarching British identity than a narrow English one, especially if the latter is taken to imply white ethnicity or English birth. The interactions of these different groups may produce varied responses: while contact with diverse groups and ethnicities usually means that attitudes become more liberal, it has the opposite effect in some cases and may lead to a more exclusive version of English nationalism.

2. Social mobility
A far greater proportion of voters has been to university, gained new kinds of qualification, and thus had contact with a wider variety of other English and non-English students and colleagues than used to happen. This experience may undermine negative group-based assumptions about ‘others’ that people held before having met them.
Working patterns have changed so that many people now have jobs very different from those of their parents. Greater social mobility has led to enhanced living standards and resulting effects on sense of status and class. However, inequality has become starker and more visible. Those with property, especially the baby boomer generation, have benefitted from the steep rise in property prices, while many of their children are now priced out of the home owner market.
The class system on which the membership and policies of the two main parties were based has changed radically: this may account for some of the fragmentation in parties. Manufacturing and heavy industry have declined, as has trade union membership. These were once bastions of communities through which people connected and made their voices heard. Replacing these jobs in heavy industry and factories has been the growth of employment in the largely non-unionised services sector, quite different from the jobs in heavy industries and factories. And more women are working in management, some of them – but not enough – at senior levels.

3. Geographical mobility
The population of England is far more geographically mobile than it used to be. This must surely affect the strengths of regional and local identities and the communities from which they spring. The most obvious source of geographical mobility is perhaps the most long-standing – to move for work. But now many young people move to attend university and are then drawn to the large urban centres for their subsequent work. This has profound effects not only on their destinations, but on their places of origin too, with many towns losing the younger members of their population. Further, middle-class people move out of cities and large towns to country areas in search of better housing for their families. Then, on retirement, people tend to move from the cities to rural areas or small towns. The ultra-wealthy are attracted to central London, living their lives close to but separate from many of the urban poor.

In sum, there are many ways in which the population of England has changed. All of these and many other changes are very likely to undermine the ties that have bound the English together. As individuals become more atomised, they tend to become more attached to smaller groups rather than sharing an overarching identity.

One longstanding expression of collective identity and will has been through political parties. But now the ability of established political parties to reflect, make sense of and respond to new realities has diminished, despite the high vote share the two largest parties normally attract. New and complex social divisions are emerging. The two main parties are both divided as never before over Brexit. They have not developed the capacity to deal with their divided memberships and divided electorates. One of the parties’ many challenges will be to deal with needs, as they arise, for developments in the governance of England around how people are represented and listened to.

Despite all this there are still many things that the people of England share. Much of what affects identifications as English or British (or neither – many people might not reflect on their identities) is shared, and it provides a kind of cultural framework for tackling problems:

Language, politics and the techniques of law and dispute resolution in England and in the UK tend to develop and change pragmatically, incrementally and creatively and not, normally, as part of a preordained rational process. Neither England nor Britain has a history of following big ideas.

This combination of cultural characteristics is peculiar to the cultures of England and the UK, and to an extent to the Commonwealth countries to which it was exported. It is part of a singular English/British mindset or mentality. There is no equivalent in mainland Europe. (It has been greatly valued in the EU.) I doubt whether it operates anywhere outside the English-speaking common law world.

And I have no doubt that elements of these peculiar cultures will all be in play as and when issues to do with governing England have to be tackled – or kicked into the long grass. (That would also be very English.) The English and the British have traditionally been a pragmatic people, drawn more towards evolutionary solutions than revolution and grand philosophy. England and the people within it have changed enormously these last decades, so it is unsurprising that some feel that they have been excluded or that the change has not happened on their terms. But despite the changes in diversity and mobility the English retain their common characteristics of language and pragmatism. All those who seek to take the next steps in Governing England must always consider these facets of the English character.