Defining the Discographic Self: Desert Island Discs in Context 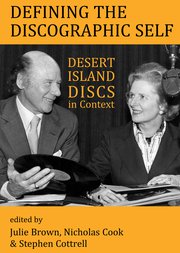 Proceedings of the British Academy, volume 211

The radio programme Desert Island Discs has run almost continuously since 1942, and represents a unique record of the changing place of music in British society. In 2011, recognising its iconic status, the BBC created an online archive that includes podcasts of all programmes from 1976 on, and many from earlier years. Based on this and extensive documentary evidence, Defining the Discographic Self: Desert Island Discs in Context for the first time brings together musicologists, sociologists, and media scholars in one volume. They reflect on the programme's significance, its position within the BBC and Britain's continually evolving media, and its relationship to other comparable programmes. Of particular interest are the meanings attributed to music in the programme by both castaways and interviewers, the ways in which music is invoked in the public presentation of self, the incorporation of music within personal narratives, and changes in musical tastes during the seven decades spanned by the programme. Scholarly chapters are complemented by former castaways' accounts of their appearances, which give fascinating insiders' views into how the programme is made and how its guests prepare for their involvement.