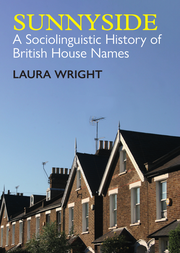 This book discusses developments in the history of British house names from the earliest written evidence (Beowulf's Heorot) to the twentieth century. Chapters 1 and 2 track changes from medieval naming practices such as Ceolmundingchaga and Prestebures, to present-day house names such as Fairholme and Oakdene: that is, the shift from recording the name of the householder (Sabelinesbury, 'Sabeline's manor'), the householder's occupation (le Taninghus, 'the tannery') and the appearance of the house (le Brodedore, 'the broad door'); to the five main categories still in use today: the transferred place-name (Aberdeen House), the nostalgically rural (Springfield), the commemorative (Blenheim Palace), the upwardly mobile (Vernon Lodge), and the latest fashion (Fernville). The development and demise of pub names and shop names such as la Worm on the Hope and the Golden Tea Kettle & Speaking Trumpet are detailed, and the rise of heraldic names such as the Red Lion is explained. Chapters 3-5 track the house name Sunnyside backwards in time to prehistory, through English, Latin, Scottish Gaelic, and the influence of Old Norse. Sunnyside's ancient origins lie in the Nordic practice of solskifte, a prehistoric method of dividing up land according to position of shadows, but the name was boosted in the eighteenth century by Nonconformists (especially Quakers), who took it to America, and in the nineteenth century by American celebrity influence. The book contains an appendix of the earliest London house names to the year 1400, and a gazetteer of historic Sunnysides.