Parliamentary Elections in Russia: A quarter-century of multiparty politics 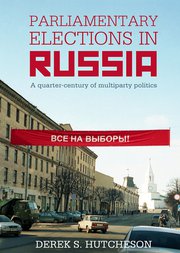 As a nuclear power, UN Security Council member, emerging Arctic hegemon and the largest state in the world, Russia - and its stability - is of extreme importance in global politics.

In the most comprehensive long-term study to date, Derek Hutcheson argues that Russa's legislature, the Federal Assembly, forms an integral part of the country's political system and machinery of governance. Having previously formed a counterweight to presidential power under Boris Yeltsin, the legislative agenda has become more centralised under Vladimir Putin. Successive changes to the electoral and party systems have resulted in the dominance of a four-party 'cartel', with the pro-presidential United Russia party at its centre.

Putting forward an in-depth analysis of post-Soviet politics, Derek Hutcheson looks forward to the next stage in Russia's political evolution.