Heroic Shaktism: The Cult of Durga in Ancient Indian Kingship 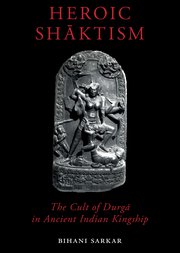 Heroic Shaktism is the belief that a good king and a true warrior must worship the goddess Durga, the form and substance of kingship. This belief formed the bedrock of ancient Indian practices of cultivating political power. Wildly dangerous and serenely benevolent at one and the same time, the goddess's charismatic split nature promised rewards for a hero and king and success in risky ventures. This book is the first expansive historical treatment of the cult of Durga and the role it played in shaping ideas and rituals of heroism in India between the 3rd and the 12th centuries CE.