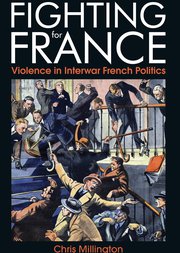 Fighting for France is a ground-breaking examination of violence in French politics in the interwar period. During these years, a range of groups at the political extremes employed physical aggression against their enemies and threatened to bring about the violent demise of the democratic regime.

Until now, historians have denied and down-played the frequency and seriousness of French political violence in favour of an interpretation that emphasises France's weddedness to democracy. Fighting for France demonstrates that the democratic culture of the late Third Republic co-existed with a culture of violence in which the physical punishment of rivals and oponents was considered acceptable. Drawing on the narratives constructed around outbreaks of violence, the book reconstructs the lived experience of fighting and the sense that contemporaries made of conflict. It examines violence in a variety of settings, from the street to the factory floor. A range of actors come under investigation, including fascists, communists and the police. Fighting for France transforms our understandings of the course of interwar France and Europe.