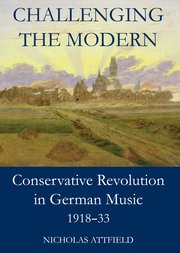 This book challenges commonplace conceptions of musical conservatism during Germany's Weimar Republic (1918-1933). Its primary goal is to offer scrutiny of uncritical links often made by musicologists and historians between musical conservatism and political conservatism of the era. It does so through a critical and nuanced application of the term 'conservative revolution', as used throughout the Weimar era and popularised in its historiography after 1945.