Waves Across the South: A New History of Revolution and Empire wins the £25,000 British Academy Book Prize for Global Cultural Understanding 2021 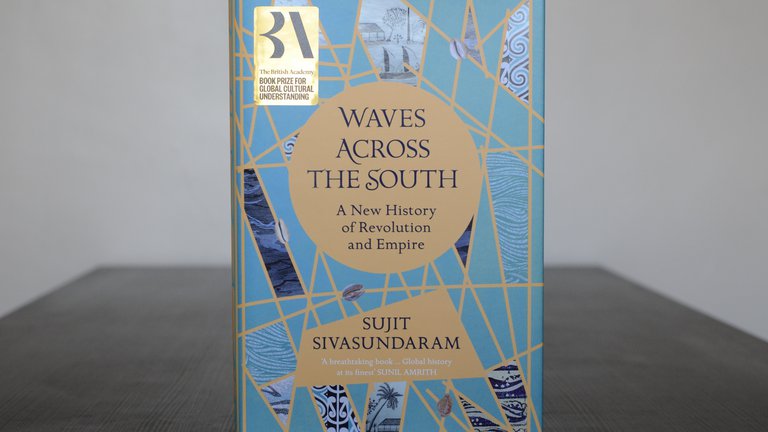 Waves Across the South: A New History of Revolution and Empire by Cambridge historian Professor Sujit Sivasundaram is today named as the winner of the ninth British Academy Book Prize for Global Cultural Understanding. The announcement was made by Chair of the jury, Professor Patrick Wright FBA, during an online celebration hosted by the British Academy.

In Waves Across the South, Sujit Sivasundaram – Professor of World History at the University of Cambridge – re-imagines the history of the British Empire with the southern seas at the heart of the story. The history of the age of revolutions is commonly centred around Europe and the Atlantic, yet in this highly original work, Sivasundaram invites the reader to consider what this history looks like from the perspective of indigenous peoples in the Indian and Pacific oceans, showing how they asserted their place in the global South as the British Empire expanded.

Sivasundaram, who was born and educated in Sri Lanka, brings together a wealth of archival material to recover an extraordinary collection of stories – from Maori mapmakers and the Parsi shipbuilders of Bombay, to the sealers who lived with Aboriginal women in Tasmania. The result is a very different account of imperialism, centred on a part of the world that barely features in many histories of the period.

“Waves Across the South is a riot of ingenuity, a truly powerful and new history of revolutions and empires, re-imagined through the environmental lens of the sea. The jury was spellbound by Sivasundaram’s skill in combining compelling story-telling with meticulous research. Even as a work of world history it speaks directly to the politics and military interventions of today.”

“This prize celebrates the role of non-fiction literature in expanding our knowledge and understanding of cultural identity and difference. This year’s winning book is a masterclass in what can be achieved through exceptional research.

“On behalf of the British Academy, it is my honour to congratulate Sujit Sivasundaram for this extraordinary work – and for shining new light on a part of the world that has been mostly overlooked in the history of empire.”

Waves Across the South: A New History of Revolution and Empire was chosen from a shortlist of four books that included: Islands of Abandonment: Life in the Post-Human Landscape by Cal Flyn (William Collins); Begin Again: James Baldwin’s America and its Urgent Lessons for Today by Professor Eddie S. Glaude Jr. (Chatto & Windus, VINTAGE) and Neither Settler Nor Native: The Making and Unmaking of Permanent Minorities by Professor Mahmood Mamdani FBA (The Belknap Press of Harvard University Press).

The British Academy Book Prize, formerly known as the Nayef Al-Rodhan Prize, was established in 2013 to reward and celebrate the best works of non-fiction that demonstrate rigour and originality, have contributed to global cultural understanding and illuminate the interconnections and divisions that shape cultural identity worldwide.

The winner in 2020 was Hazel V.Carby for Imperial Intimacies: A Tale of Two Islands. Previous winners also include: Toby Green for A Fistful of Shells – West Africa from the Rise of the Slave Trade to the Age of Revolution (2019); Kapka Kassabova for Border: A Journey to the Edge of Europe (2018); and Timothy Garton Ash for Free Speech (2017).