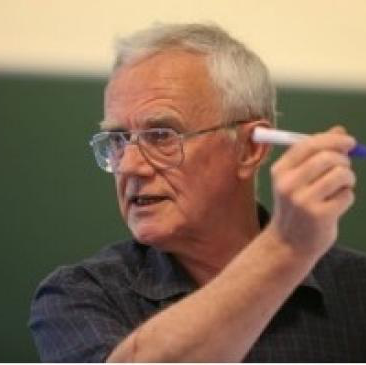 Jim Hurford trained as an articulatory phonetician, and has written textbooks on semantics and grammar, two books on numeral systems and three books on the origins and evolution of language, beside articles on phonetics, syntax, phonology, language acquisition and pragmatics. His interest is in reconciling various traditions in Linguistics which have tended to conflict. His work is interdisciplinary, based in linguistics, but reaching out to, and taking insights and data from, anthropology, psychology, neuroscience, genetics, artificial intelligence and philosophy. His thinking relates the work of formal linguists who study sentences out of their communicative context, psycholinguists and neuroscientists who study the brain processes underlying language use, and anthropologists and sociolinguists who emphasize how language is embedded in social groups. This effort considers how representations of languages in individual minds interact with properties of languages used in communities, and emphasizes the interaction of evolution, learning and communication. Early work focussed on numeral systems, and this broadened out to the topic of the evolution of language, in all senses of that phrase. He produced some of the earliest computer simulations of aspects of the evolution of language.