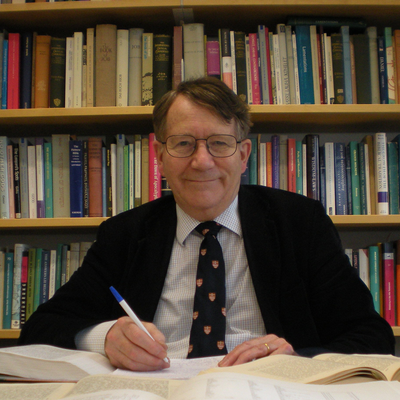 Graham Davies studied Literae Humaniores (Classics) and Theology at Merton College, Oxford, where he developed his interests in the Old Testament, Hebrew and biblical archaeology. He studied for his doctorate at Peterhouse, Cambridge under the supervision of Professor Ronald Clements.

From 1971 to 1978 he was Assistant Lecturer and then Lecturer in Theology at the University of Nottingham. In 1979 he moved back to Cambridge to teach the Old Testament and Hebrew and was promoted to Professor of Old Testament Studies in 2001. He became a Fellow of Fitzwilliam College in 1983 and was the College's Director of Studies in Theology from then until 2008. In 1998 he was awarded an Oxford D.D. From 1990 to 2000 he was Editor of the Palestine Exploration Quarterly and in 2004 he became the Old Testament Editor for the International Critical Commentary. In 2008 he gave the Centenary Lecture to celebrate the foundation of the Schweich Lectures of the British Academy.

On his retirement in 2011 he was presented with a Festchrift, On Stone and Scroll, where details of his publications can be found. He is currently working on the ICC commentary on Exodus and studies of Hebrew semantics.

University of Cambridge Lecturer in Divinity

University of Nottingham Department of Theology

Studies on the Language and Literature of the Bible: Selected Works of J.A. Emerton

The Schweich Lectures and Biblical Archaeology

The Way of the Wilderness